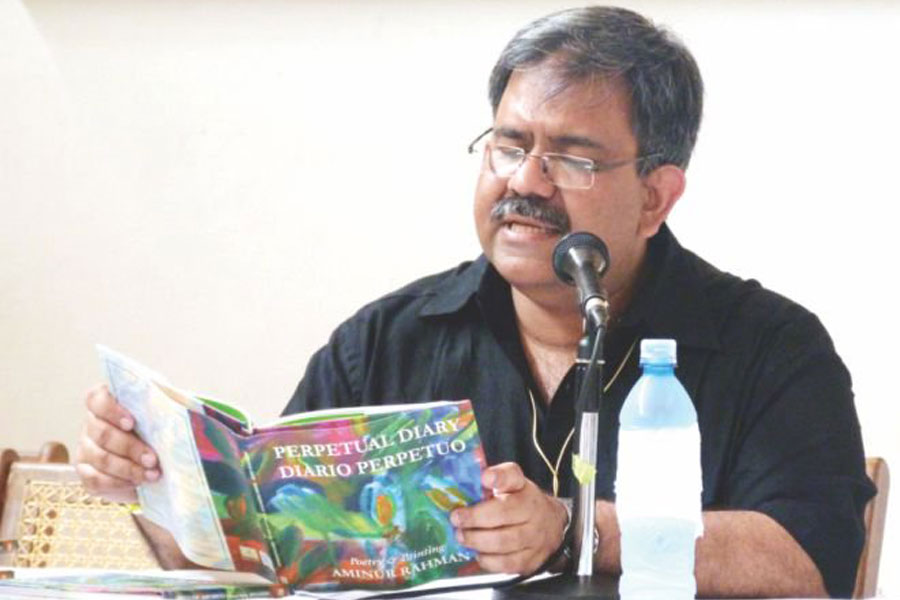 A poet's passion for love

Ithaka, a Spanish publishing house recently published English-Spanish translated book “Perpetual Diary (Diario Perpetuo)” of poet Aminur Rahman. He is one of the significant poets of the 80s in our country. The significant part of this publication is that it was recently published in the 9th International Poetry Festival, Granada in Nicaragua. This is the first of a kind; a Spanish-English bi-lingual book has been published from an international publisher. The book was launched by the president of Granada Poetry Festival and noted Nicaraguan poet Francisco De Asis. At the launching ceremony, renowned Nicaraguan poet Professor Asatasio Lovo delivered an article on the publication. Aminur Rahman also read out some of his poems on that occasion.

The book includes fourteen paintings (in mixed media) of the poet. The Spanish translation has been done by famous Colombian poets Carlos Bedoya and Rafael Patino and Spanish poet Rafael Carcelen Garcia and Maria Menor. The Spanish translation has been edited by eminent Nicaraguan poet Anastasio Lovo. Aminur has written few poems in English, while other poems have been translated from Bangla by noted Indian poet Sudeep Sen, late AZM Haider and others. The English poems were edited by South African famed poet and novelist Peter Horn.

The poet has tried to connect the poetry to the intellect, rather than immersing it wholly in feelings and sensations. Utterly a romantic poet, his poems articulate the intensity of feelings and adoration. The poet's achievement is that he weaves a subtle irony through the intensity of emotion that quite overpowers him. His poetry is meditative and experimental. In his poems, a reader will discover a passionate poetic sensibility. He has also raised eroticism to the level of art. The main elements in his poetry are solitude, love, yearning and inner vision. His style is unquestionably unique and evocative.

Aminur has published six collections of poems in Bangla. His works have been translated in more than twenty-five languages and has poetry books in English, Spanish, German, Japanese, Mongolian and Arabic. He also has two prose books to his credit, while he has translated eight books of poetry and edited quite a few poetry magazines and books. He is also an acclaimed art critic in our country. As an invited author, he has read his works at various international arts and literary festivals, universities and cultural venues. He has represented Bangladesh at the poetry festival in Colombia, Malaysia, Mongolia, India, Iraq, Japan, Sri Lanka, Spain, Nicaragua etc. He was awarded Chinggish Khaan Gold Medal (2006) in Mongolia and CLA. Honour (2007) in Malaysia.