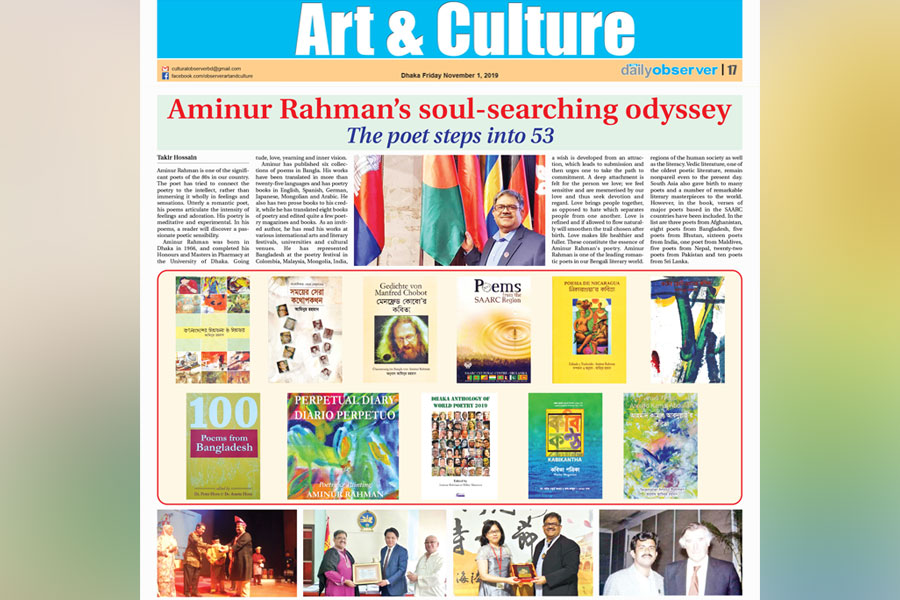 Aminur Rahman is one of the significant poets of the 80s in our country. The poet has tried to connect the poetry to the intellect, rather than immersing it wholly in feelings and sensations. Utterly a romantic poet, his poems articulate the intensity of feelings and adoration. His poetry is meditative and experimental. In his poems, a reader will discover a passionate poetic sensibility.

Aminur Rahman was born in Dhaka in 1966, and completed his Honours and Masters in Pharmacy at the University of Dhaka. Going through Aminur's poems, one must consider a world which encompassed a variety of sentiments, strong expressions and romantic articulation. Readers will here come by an opportunity to enjoy a romantic's view of the many different areas of life. Most of his poems are a rich blend of theme and technique, the richness enhanced by the poet's skill in using myriad pictorial imagery, descriptions and metaphors. All of them are serious in mood and deep and reflective in an exposition of aesthetic feelings.

Aminur is by nature a shy and reticent person. He is very innovative and original in thought in his poetry. He has sharpened our acuity, observation and exploration. Reading his poetry is like going on an emotional exploration. His poetry obsesses our mind and soul. One is quite clear about the fact that he is a modernist in the complete sense of the meaning. His style is unquestionably unique, individualised, expressive and easily understandable. In his poems, one feels the presence of a lonely soul, an underlying sorrow, a feeling of emptiness and an emotional expression of a melancholy heart.

AminurRahman is known for his attempts to connect the poetry to the intelligence rather than immersing it wholly in thoughts and sensibilities. Utterly a romantic poet, his poems express the intensity of feelings and adoration. The poet's major achievement lies in his weaving of a subtle irony through the intensity of emotion that quite overpowers him. The main elements in his poetry are solitude, love, yearning and inner vision.

Aminur has published six collections of poems in Bangla. His works have been translated in more than twenty-five languages and has poetry books in English, Spanish, German, Japanese, Mongolian and Arabic. He also has two prose books to his credit, while he has translated eight books of poetry and edited quite a few poetry magazines and books.  As an invited author, he has read his works at various international arts and literary festivals, universities and cultural venues. He has represented Bangladesh at the poetry festival in Colombia, Malaysia, Mongolia, India, Iraq, Japan, Sri Lanka, Spain, Nicaragua etc. He was awarded Chinggish Khaan Gold Medal (2006) in Mongolia and CLA. Honour (2007) in Malaysia, Numera World Award of Literature in Malaysia, Heaven Horse Award in Mongolia, Svout Award in Philippines and others.

Here I have focused a number of his books----

Besides being a poet, Aminur Rahman is a noted art critic. He has been writing on art for over two decades. He has written about eminent artists like Zainul Abedin, Shafiuddin Ahmed, Mohammad Kibria, Quamrul Hassan, SM Sultan, Rafiqun Nabi, Monirul Islam, Kazi Ghyas, Shahabuddin Ahmed, Shahid Kabir, Hamiduzzaman Khan, Abdus Shakoor Shah, Jamal Ahmed, Muniruzzaman, Ahmed Nazir, Laila Sharmeen, Maksudul Ahsan, Mohammad Iqbal and others. Most of the articles of the book were first published on the Daily Ittefaq. Aminur Rahman has sharply analysed working styles, processes, methods and the mediums of these artists. Through the book, one can easily understand the chronological development of art in our country. In his writings, he has tried to grasp the first, second, third and fourth generations of painters.
100 Poems from Bangladesh

Poets of the fifties of Bangladesh introduced elements of modernity as conceived in the West in Bangla poetry in Bangladesh. It is through the masterly rendering of the French poet Baudelaire's poetry in Bangla by Buddhadev Bose that Bangladeshi poets of fifties have been venured into the realm of modern European poetry. They are also profoundly influenced by the works of the German poet Rilke, the English poets W B Yeats and T S Eliot, without compromising their own originality and individual characteristics.
Bangla poetry has been nurtured more in Bangladesh than in West Bengal of India. This is because their first language being Bangla and the valiant Bangalees sacrificed their lives for their mother tongue during the language movement in 1952. The commemoration of 21st February as the Bangla Language Day is one of the most solemn and honourable occasions in Bangladesh. The liberation war in 1971, where three million people gave their lives for the country, was the most significant period for Bangla literature. The new literature with new voices from a newly emerged country flourished only from then on. New Bangla poetry is moving forward along with its traditionalism and modernism although many have practiced post modernism styles.

In this anthology only twenty five contemporary poets are represented with 100 poems. A good number of poets could not be included mainly due to non-availability of proper translations.
Kashter Slatee Premer Fossil and Perpetual Diary Love is a symbol of truth and beauty and gives us insights into divine and spiritual life. Without love and affection, it is rather difficult to think about the existence of the soul in the body. Loving humankind and feeling empathy, delight and liberty are the four aspects of true love. Love is tranquil, quiet, honest, virtuous and based on conviction, esteem, confidence, support and truth. It does not have any room for jealousy, distrust, conceit, snobbery and unfairness. Love excuses all. Love happens when a wish is developed from an attraction, which leads to submission and then urges one to take the path to commitment. A deep attachment is felt for the person we love; we feel sensitive and are mesmerised by our love and thus seek devotion and regard. Love brings people together, as opposed to hate which separates people from one another. Love is refined and if allowed to flow naturally will smoothen the trail chosen after birth. Love makes life healthier and fuller. These constitute the essence of Aminur Rahman's poetry. Aminur Rahman is one of the leading romantic poets in our Bengali literary world. He is a poet of silence and mystery. Since the inception of his poetry, he has carefully kept himself removed from any disquiet and unsteadiness. Besides being a visionary, the poet has regularly tried to express his personal feelings and observations in romanticism. One will read Kashter Slatee Premer Fossil and Perpetual Diary avidly; and out of that experience one can easily read the poet's mind and bore into his soul. It is true that the meaning of love differs from one individual to another. Expressions of love come to poetry, indeed hold it aloft, in various forms. The rendering of love is very clear in the poems Aminur throws across his canvas of thoughts. His love for feminine beauty and natural objects comes in tandem with the frustrations and dissatisfaction associated with modern life. It is this very aspect that has added a degree of extra charm to the poems in the two books. He uses the imagery of the moon, moonshine, the sun, the sky and all shades and moods of clouds at random.

After a close perusal of Aminur's poetry, though it is very difficult to trace the exact silhouette of the poet's mind, one is quite clear about the fact that he is a modernist in the complete sense of the meaning. His style is unquestionably unique, individualised and expressive. In his poems, one feels the lament of a lonely soul, an underlying sorrow, a feeling of emptiness but not without a tinge of hard realities and other realisations that one can call forth only from life itself.

Poems from the SAARC region

South Asia is one of the oldest regions of the human society as well as the literacy. Vedic literature, one of the oldest poetic literature, remain nonpareil even to the present day. South Asia also gave birth to many poets and a number of remarkable literary masterpieces to the world. However, in the book, verses of major poets based in the SAARC countries have been included. In the list are three poets from Afghanistan, eight poets from Bangladesh, five poets from Bhutan, sixteen poets from India, one poet from Maldives, five poets from Nepal, twenty-two poets from Pakistan and ten poets from Sri Lanka.
From Bangladesh, a number of works by poets Nasir Ahmed, Nirmalendu Goon, Jahidul Huq, Aminur Rahman, Shamsur Rahman, Hayat Saif, Fazal Shahabuddin and Habibullah Sirajee have been included.

Aminur Rahman has good relationship with a number of significant poets of Nicaragua. He has attended several poetry festivals of Nicaragua and has tremendously grown interested in poetry of the country. He has also received a number of awards from the country for his immense contributions to poetry. He has edited and translated the book, where poetical pieces by several Nicaraguan poets have found a distinctive place. The Nicaraguan poets featured in the book are - Ruden Dario, Claribel Alegria, Ernesto Cardenal, Omar d'Leon, Vidaluz Meneses, Francisco de Asis Fernandez, Gloria Gabuardi, Jorge Eduardo Arellano, Gioconda Belli, Anastasio Lovo, Blanca Castellon and Santiago Molina Rothschuh.

Kabikantha, a noted poetry magazine was launched in 1954 by two famous poets of the 50s--- Shamsur Rahman and Fazal Shahabuddin. After the death of Fazal Shahabuddin in 2014, poet Aminur Rahman has been editing the journal. Noted poets, columnists, authors, social and cultural activists, architects, lyricists and personalities from different fields have contributed for the publication. The journal has come out usually on the birth anniversary of Fazal Shahabuddin.
The writer is an art and literary critic.