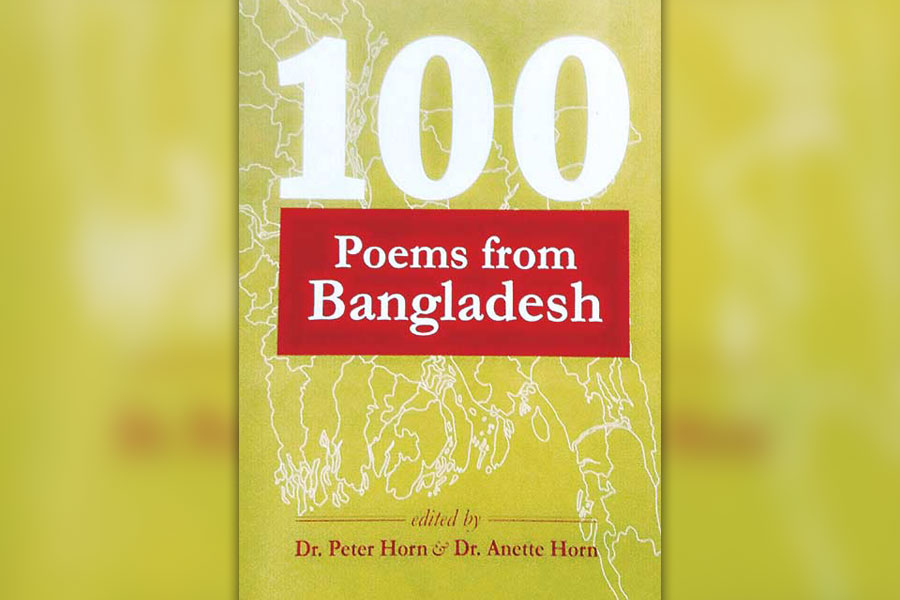 Poetry is lost when translated, some argue; on the other hand, poetry is rediscovered when translated as it overcomes the langage border crisis. Such an endeavour is launched featuring 25 poets of Bangladesh entitled 100 Poems from Bangladesh, edited by Dr Peter Horn & Dr Anette Horn, published by Edition Delta (Germany).

To project the poetry of Bangladesh to the foreign lands, this book astutely picks up 25 verse-makers of Bangladesh and did quite justice to the English translation of 100 poems, and suffused Bangaliana beyond border.

The book sets sail with the poem portraying Eliotic existential crisis: Shamsur Rahman's 'Electra's Song', which is translated by the celebrated poet Kaiser Haq: "Am I a flute on which anyone can play any tune, / anytime, any way they wish? I walk alone / on a blood thirsty thorn-strewn path; / the future breathes in my throat, in my grave."

Focusing on the function of the translation, also known as the effect, Professor Kaiser Haq 'naturalized' (theorized by George Steiner in 'The Hermeneutic Motion') the Translated Language (TL).

In addition, Shamsur Rahman's 'Asad's Shirt', transcreated by Syed Najmuddin Hashim, or 'Roar, O Freedom', translated by by Kabir Chowdhury, seems to roar to the world about Asad's shirt that "flutters on top of belching factory chimneys", also can listen to the roar of the victims of modernism that "hangs the full moon on the scaffold" and bans "poems, stanza by stanza, quietly, without any fanfare".

Thus, such process of translation maintains the poetic features by transforming the Source Language (SL) into a 'new original' (theorized by Walter Benjamin in 'The Task of the Translator') to overcome the linguistic untranslatability.

*Poetry is more 'expressive type' (theorized by Katherina Reiss in 'Type, Kind and Individuality of Text, Decision Making in Translation'), rather than informative. In order to translate the effect, the SL goes through linguistic changes, which theorists call 'invasion' (George Steiner's 'The Hermeneutic Motion'). But later, the final stages of translation, as Steiner believes, are 'incorporation' and 'restitution', should be done to compensate for the loss occurred to the original text, the SL.*

Poetry is more 'expressive type' (theorized by Katherina Reiss in 'Type, Kind and Individuality of Text, Decision Making in Translation'), rather than informative. In order to translate the effect, the SL goes through linguistic changes, which theorists call 'invasion' (George Steiner's 'The Hermeneutic Motion'). But later, the final stages of translation, as Steiner believes, are 'incorporation' and 'restitution', should be done to compensate for the loss occurred to the original text, the SL.  The next poet who gets a ride in this poesy-voyage-beyond-border is Alauddin Al Azad. Eminent Professor Kabir Chowdhury translated 'The Monument'. Here is a glimpse: "Is it not enough that when a single flower is plucked, the whole garland heaves and sways."

Moreover, Kabir Chowdhury translated Syed Shamsul Huq's 'March 1, 1971' where visual imageries are wisely brought to the homeland of the TL, yet carrying the whole spirit of the original text: "I do not have a flag in my hand, my flag is my mother's face".

Theorist Walter Benjamin calls such procedure of translation as 'afterlife' (The Task of the Translator). For instance, when Kabir Chowdhury re-verses Al Mahmud's 'Whenever I Go' in English, it does not seem to be translated, rather blooms as a poem, as if twin-sister to the SL: "come rushing behind me angry waters of the river, saris soaked in blood, and a string of ducks scattered by the sound of sudden gun shots"
Bengal's personification in poetry takes poems to a new height, and the beauty is trans-created by Sudeep Sen in Fazal Shahabuddin's poem 'Suddenly':
"I know now, Spring is at my doorstep---
I have started trembling
as I know this season will last only a wink---"
The way rebels voice, poets pen work as ink-guns, and the role of rebel verses are imbibed with the history of Bengal. For instance, Haroonur Rashid gave re-birth to Shaheed Quadri's 'I Salute You Darling':
"Have no fear,
I'll have it all
all arranged. The B 52s and Mig 21s
will drop overhead, and drop
yes darling
drop sweets, chocolates, and toffees,
like paratrooper on your yard."

Furthermore, the verses of Rafiq Azad that upset the whole nation now crosses boundaries through Kabir Chowdhury's: "Give me food, you bastard, /Or I will eat up the very map."
On freedom of speech, poet Asad Chowdhury's magical verses 'Whenever I Talk', is now at multi-cultural doorstep after Saidur Rahman's transcreation: "Whenever I talk, you brand it protest  I talk of dreams, I talk of beauty, I talk of a future more beautiful than dreams."

The poem 'Nationalization' of Mahadev Saha, translated by Haroonur Rashid, speaks of the contemporary capitalistic tales of lives, of human, in Bangladesh, and the poet now "like banks, insurance, textile mills and factories shall nationalize moonlight and happiness"

English urbanists now faces Abul Hasan's one native language that is 'Hunger', translated by Haroonur Rashid. In addition, a sight of a sarcastic city gets vivid in Habibullah Sirajee's 'The Cop Reads the Newspaper', translated by eminent Professor and bi-lingual author Syed Manzoorul Islam:
"The cop reads the newspaper at Bangabhavan's gate, in attention,
the wind gets blown inside the Secretariat, files move, cops salute."
Poet Aminur Rahman's 'Self-willed Exile', translated by A Z M Haider, draws the curtain, and leaves a mark inside, shivers the poesy-self:
"Maybe I have scarcely written a line of verse
all these days.
But I dwell in the abode of poesy.
My address is still the same
Where wind doors remain open
where bliss trickles down from green leaves
where water birds descend from clouds
I live there,
I shall remain there till eternity
Let that life be a life of exile from poetry."